The “Sales Rep Productivity” feature provides your sales team with interactive, data-driven analytics updated on a daily basis. This keeps your sales team focused on the right activities and helps you move faster through key sales cycles. 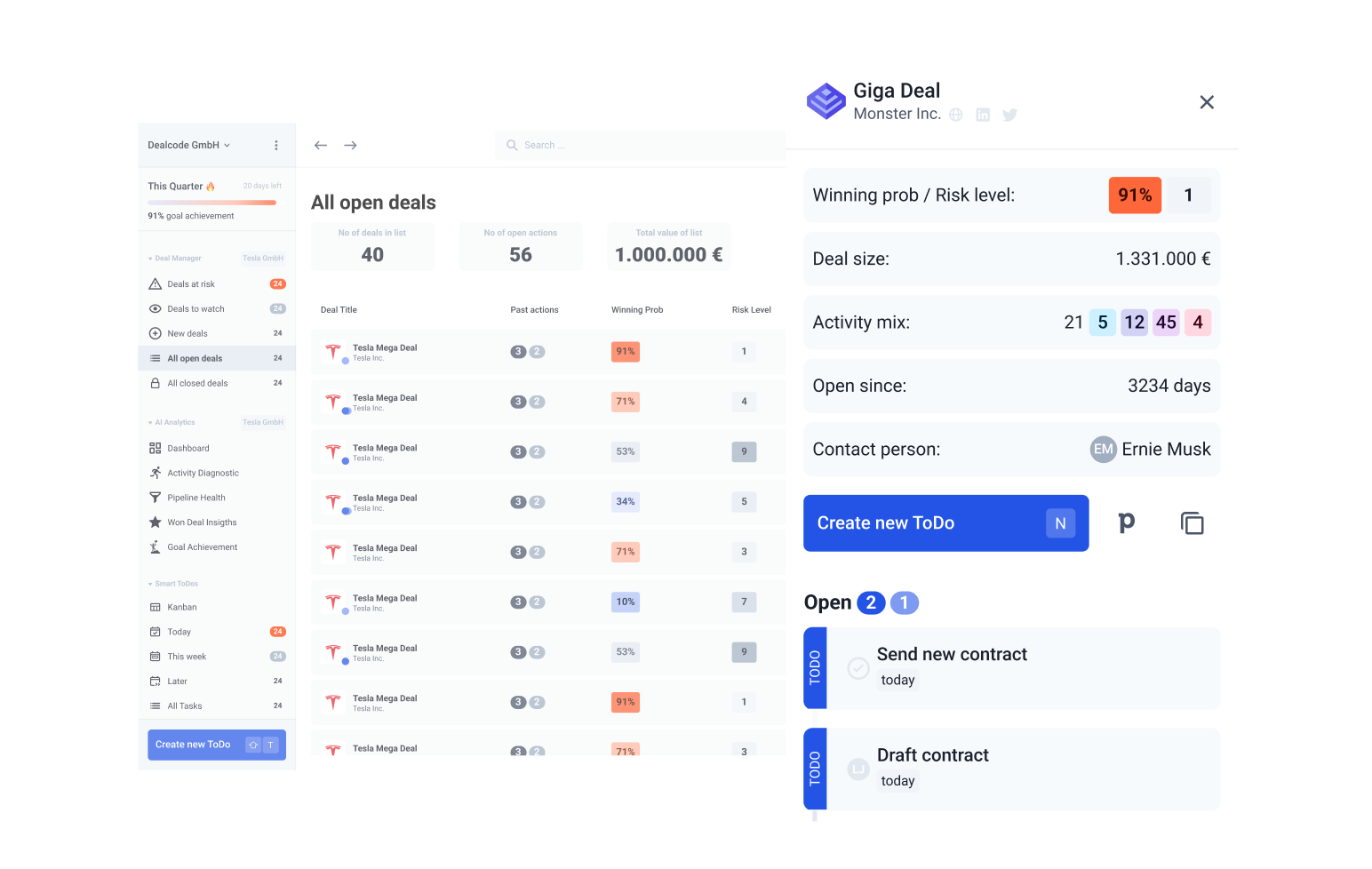 Why you need this feature

Only Focus on The Most Important Activities

Do your sales reps know which activities make the most sense to engage in and when in order to close the most important deals as quickly as possible?

Every stage of the sales cycle presents sales reps with new challenges. With Dealcode's AI-powered software, sales reps can keep constant watch over the most relevant deal data. To further increase their efficiency, the feature shows which activities will help close a deal the fastest.

The AI-powered productivity feature was developed in close cooperation with sales professionals from the SaaS sector to meet the needs of everyday sales operations. In today’s sales environment, most sales reps feel overwhelmed by the large amount of information and its visualization in CRMs. This is why Dealcode’s feature presents only the most important metrics for deals in the pipeline - clearly structured and with a focus on recommendations for action.

Identify Deals to Watch With The Sales Rep Productivity Feature

Which deals should I focus on as a sales rep in order to generate as much revenue as quickly as possible? “Deals to watch" refers to deals in the sales pipeline with above-average potential and which therefore require special attention. However, even these important deals can often get lost amidst other pressing day-to-day sales responsibilities.

The AI identifies all deals to watch based on win probabilities and additional deal metrics. This allows B2B sales teams to see where easy-to-generate revenue lies within the sales pipeline and which deals are no longer worth investing in.

At the same time, sales teams can also monitor all important key metrics for deals to watch, such as which activities may have already taken place and when. The Deal Manager, also Sales Rep Productivity, feature clearly displays all essential parameters so that sales reps know exactly which steps are the best to take next in the sales cycle.

To further ensure you don't miss a single deal to watch, the Productivity Feature's Notification System keeps your B2B sales team in the loop when critical tasks are overdue.

Do you know whether your sales team is focusing on easy-to-win deals? For most B2B sales organizations, the answer to this question isn’t so clear-cut. Decisions are usually made on gut feeling and tasks are completed in the order they come in. Without prioritizing deals, sales reps miss out on the opportunity to close as many deals as quickly as possible.

In most cases, the longer a deal remains open in the pipeline, the lower its win probability tends to be. With each additional activity, the deal consumes more and more time—and money. AI software constantly updates the win probabilities of all deals in real-time. Thanks to analytics, sales reps know exactly which deals they should tackle next.

Dealcode's “Sales Rep Productivity” feature offers the added advantage of tailored artificial intelligence solutions at the company-specific level. The underlying AI learns and masters an individual calculation model for win probabilities for each sales organization. After all, every sales team follows different rules—including yours. Furthermore, the feature can be customized to meet the needs of your own sales organization. Decide for yourself which data you want to see and to what extent.

Are your sales reps hesitant to disqualify mediocre to bad deals? In day-to-day sales, reps often find difficulty in accurately assessing their deals and giving the right weight to their feasibility. Yet, this is the only way to maximize sales performance.

The risk level helps to identify exactly those deals that will probably never be won - even with a particularly well planned-out and proactive sales strategy.

With the “Sales Rep Productivity” feature, your SaaS sales team has access to a data-driven decision-making tool that makes it easier to disqualify lackluster deals and paves the way for efficient investment of resources into more promising opportunities.

Who will be your next client?

We bring back the focus to your sales activities. Our value proposition:
Spend less time on business that will never happen and win more deals faster.

With Dealcode you know who will be your next client!